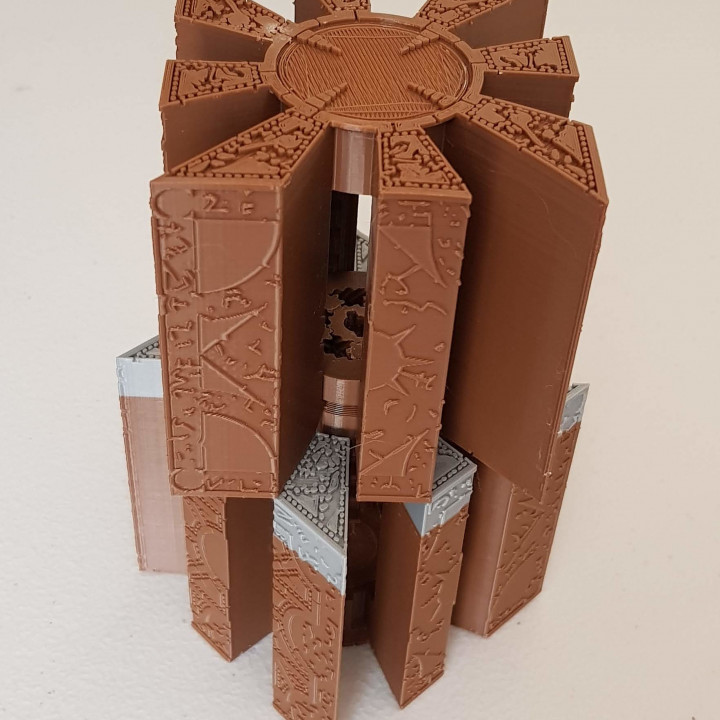 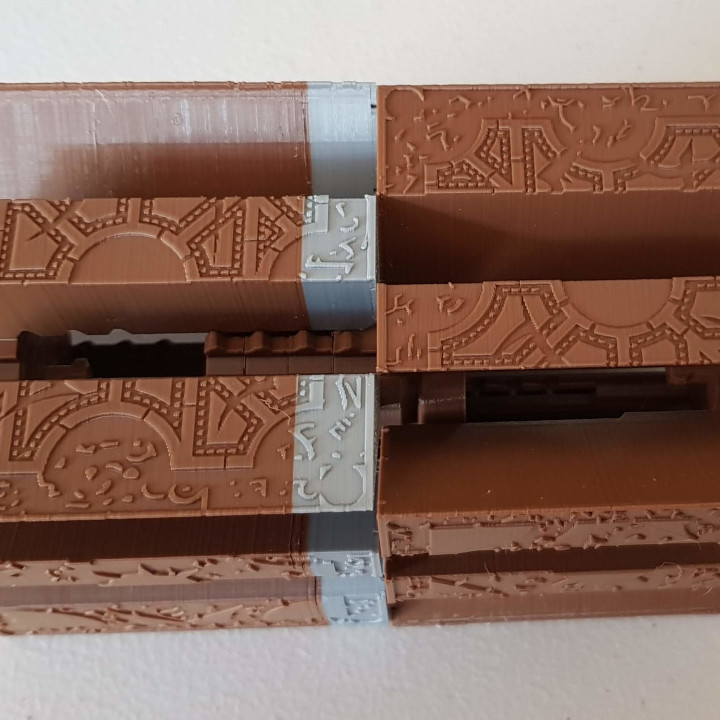 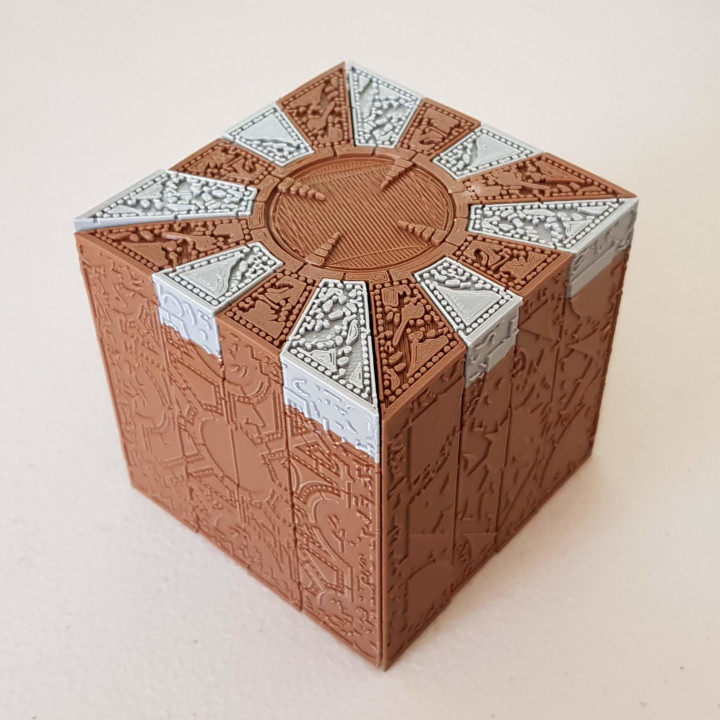 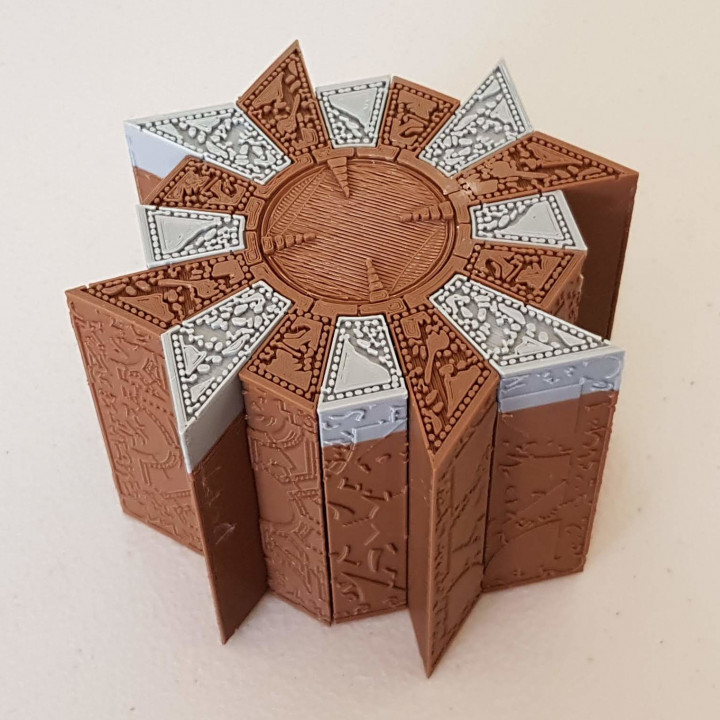 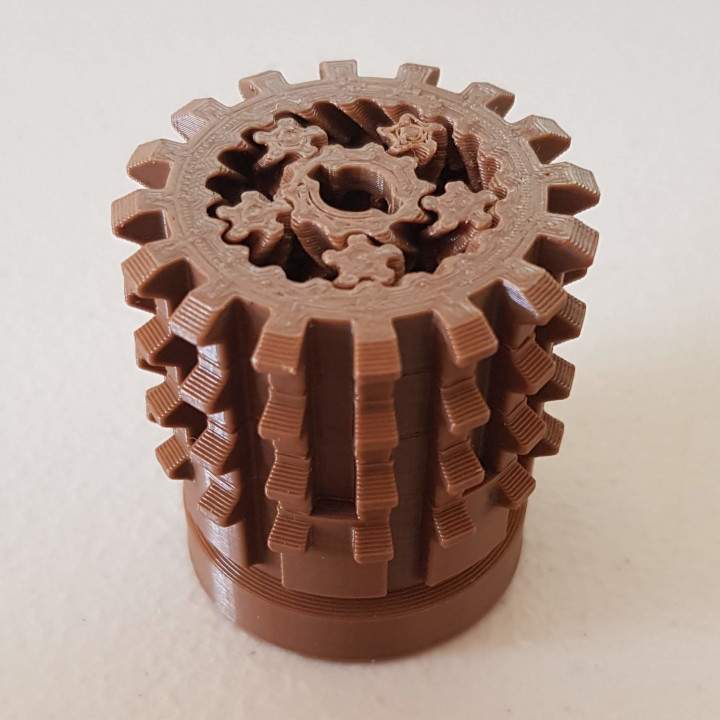 Assembly video - Jump to the end to see the finished product in action. "Core" preparation. These are for the previous versions but are mostly applicable. Key takeaways are dial in your printer to avoid "elephant foot" and tolerence to allow gears to print slightly fused - too much and they will stay fused, too little and there will be too much backlash. Give the core a whack on the side with a rubber mallet to free the gears, then use a single edged razor blade to carefully "crack" the ring gears (take care, blood has been shed to bring you this box - a hobby knife is not the right tool, wedging not slicing).

Print at 0.2mm (at least the core - it is designed to produce a 1-layer gap between the ring gears and is sensitive to layer height) and separate ring gears with a single edged razor blade or scraper. Print upper and lower parts separately (around 16 hours each, 8 for the core). Ease the core (wider tabs first, careful of orientation and alignment of the narrow tabs) into the end of the "claw", they will need to flex a little.

Enable Support Interface at 100%, Touching Buildplate with overhang of 85 degrees for improved finish. This will give a nice solid disk to support the raised dial which can be pried off. Core does not require support.

I'd also recommend "breaking in" the core by giving it a few minutes on a drill or Dremel tool to spin the gears (I use a long M5 nut and bolt in the drill chuck). Mark the starting positions with a pencil. They will soon wear in to move freely.

If you are having trouble getting the dials to move, a strip cut from a soda can can be used as a shim. Work it in and around the gap.

I have attempted to remain faithful to the original design, however it is apparent that multiple on-screen props were used with differing configurations, even some faces mirrored. To this end I have settled on the widely used HR1 configuration by Xane. 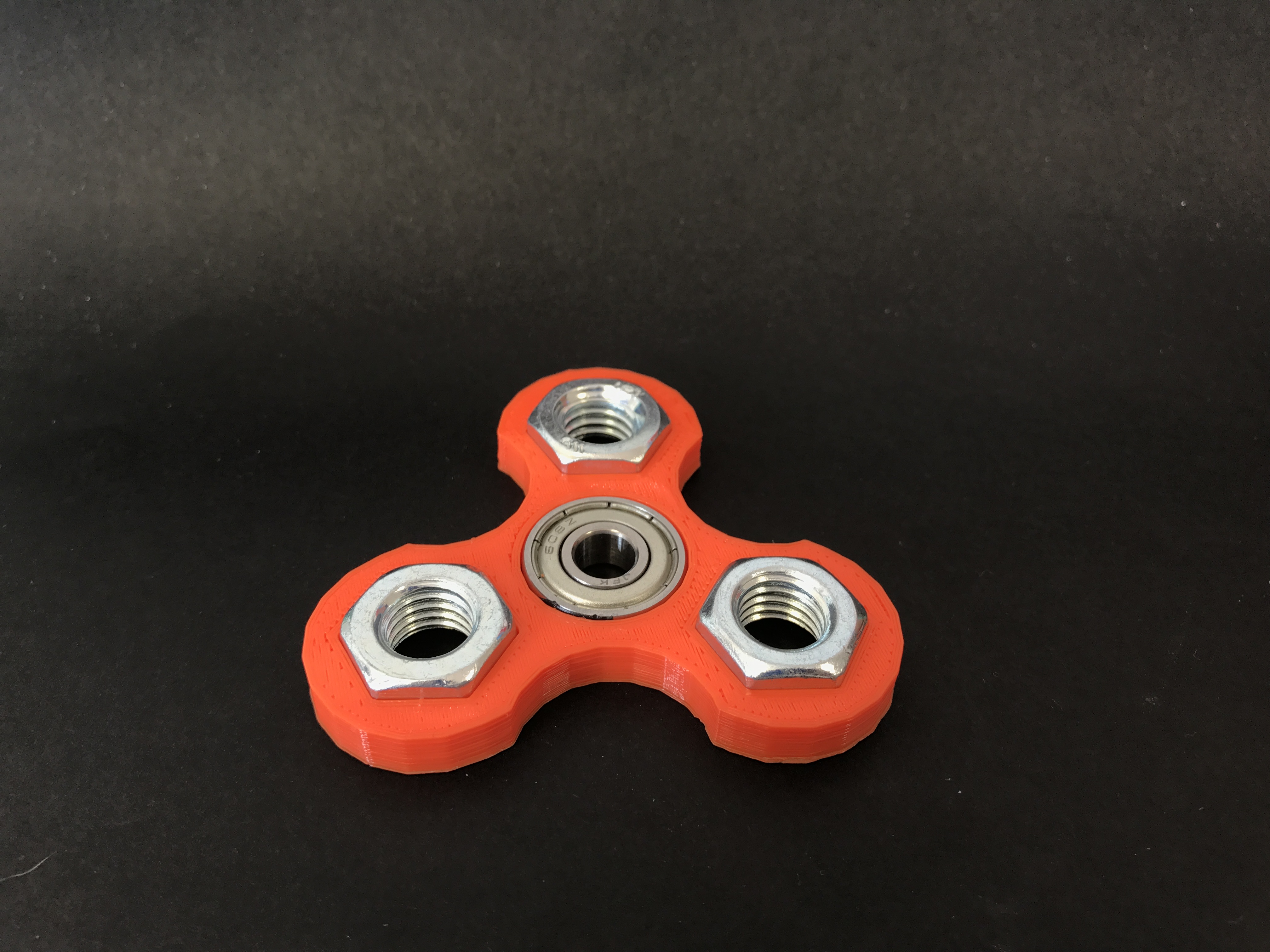 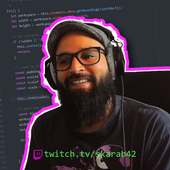 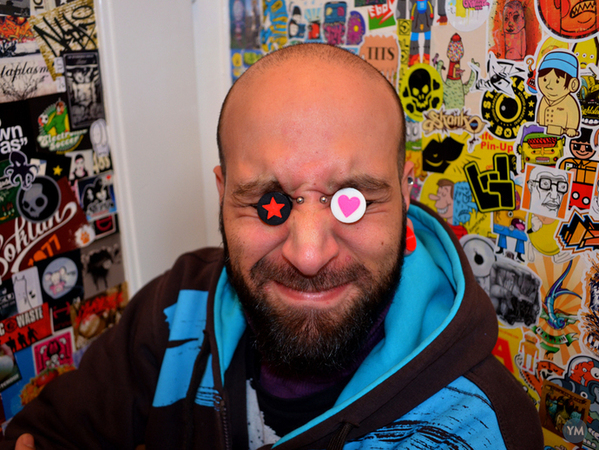 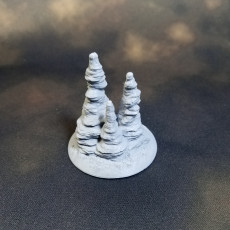 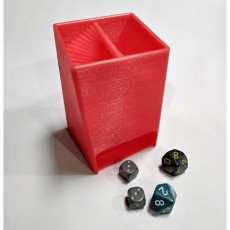 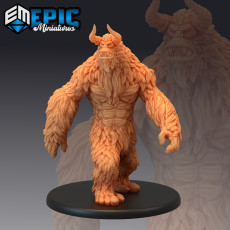 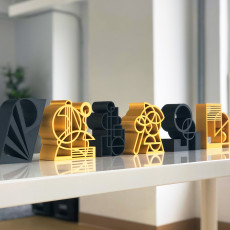 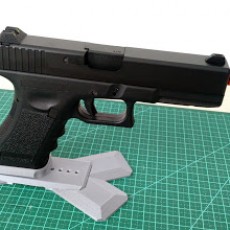 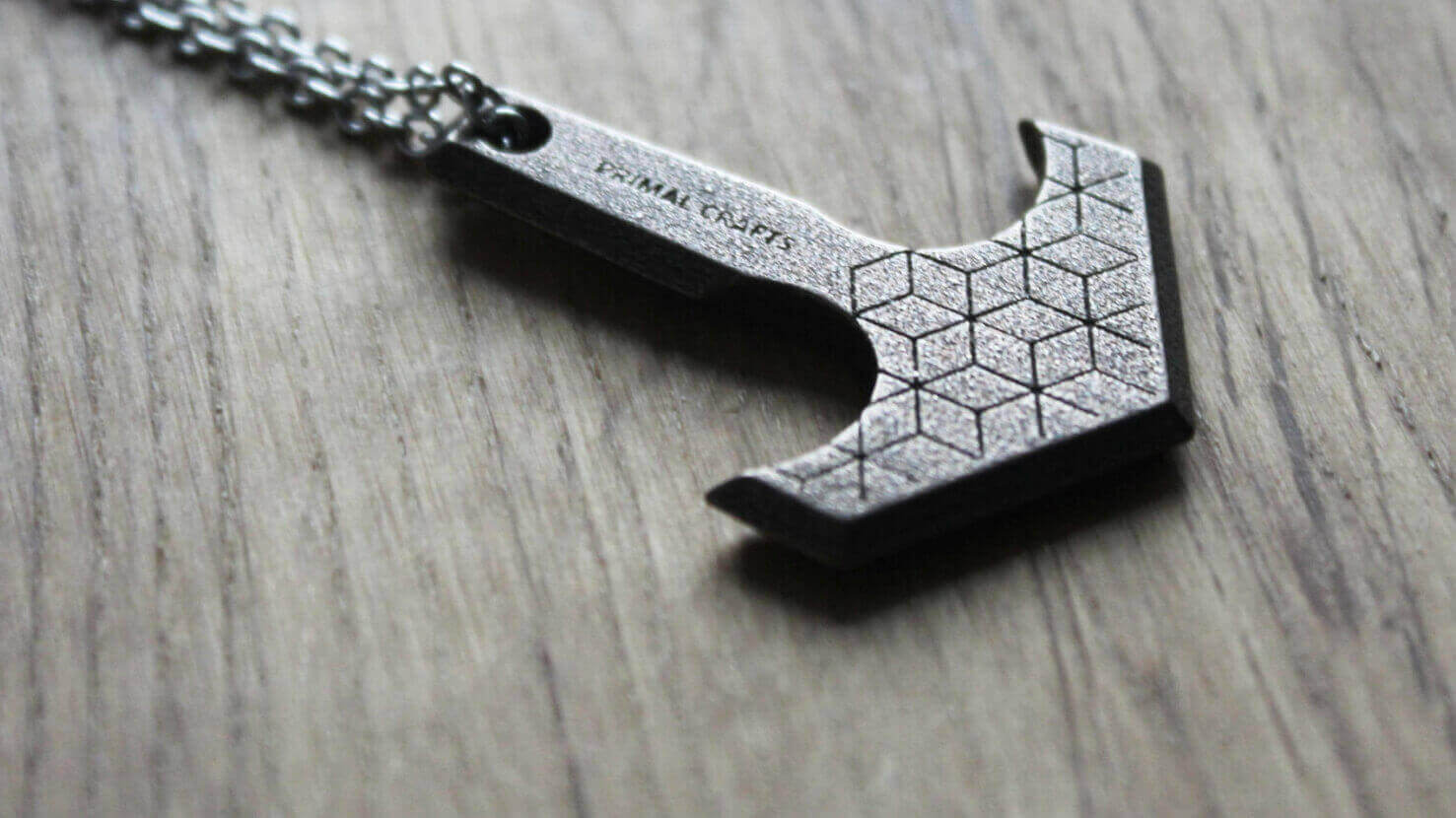 Primal Crafts is a Danish jewelry brand which uses 3D printing to create beautiful pieces made from titanium, steel and precious metals. 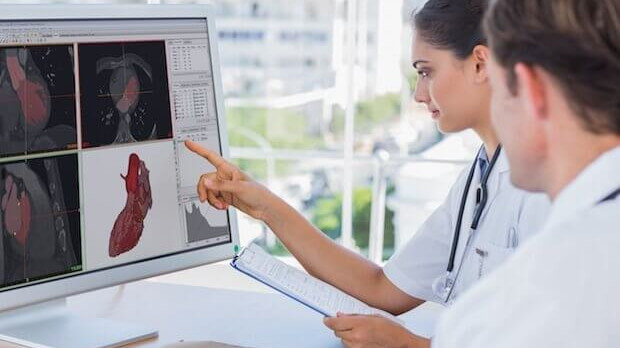 To find non-surgical interventions for mitral regurgitation, Materialise and Henry Ford Health Systems bring their workflow to a wider market. 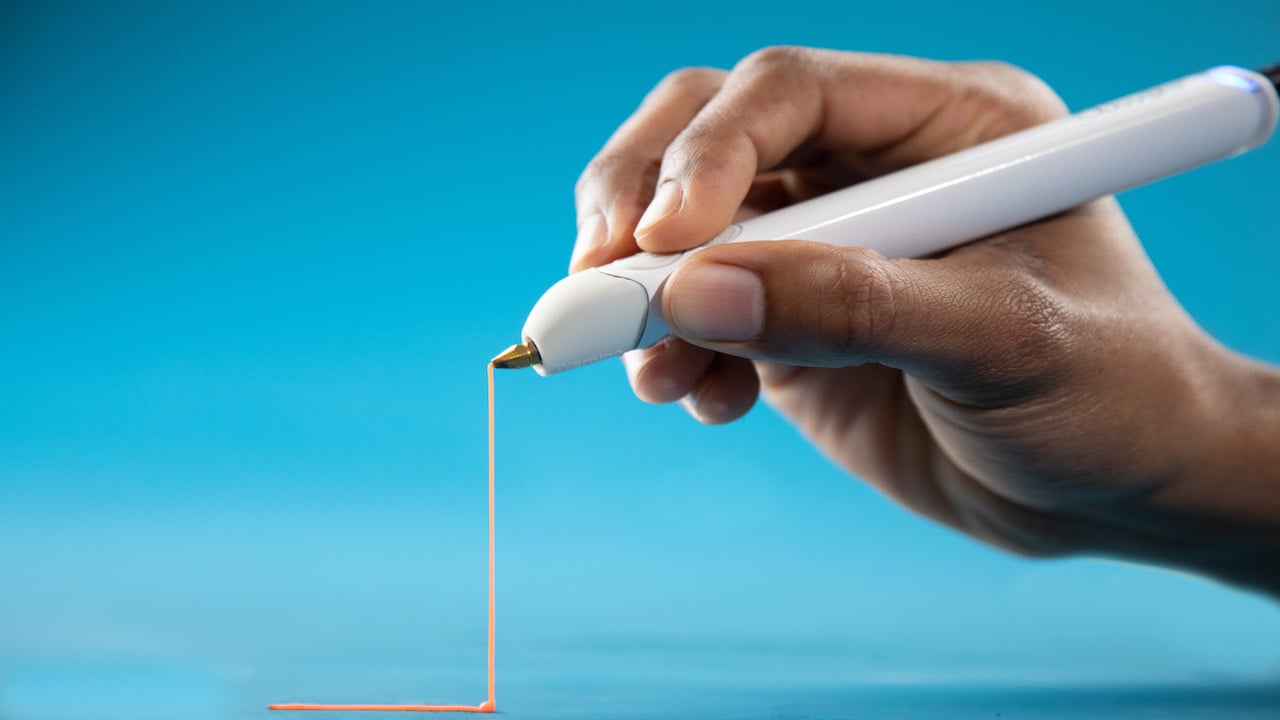 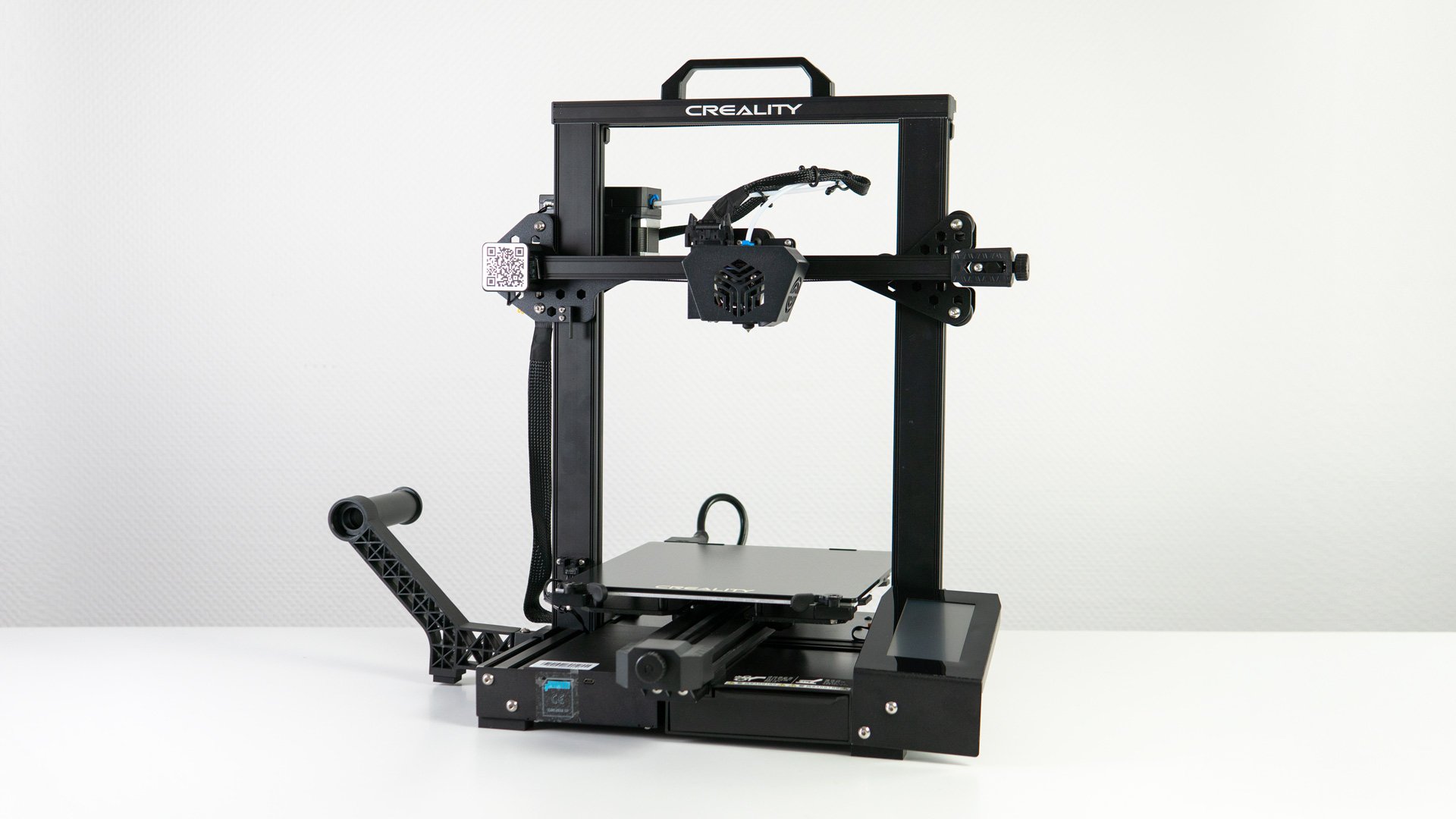 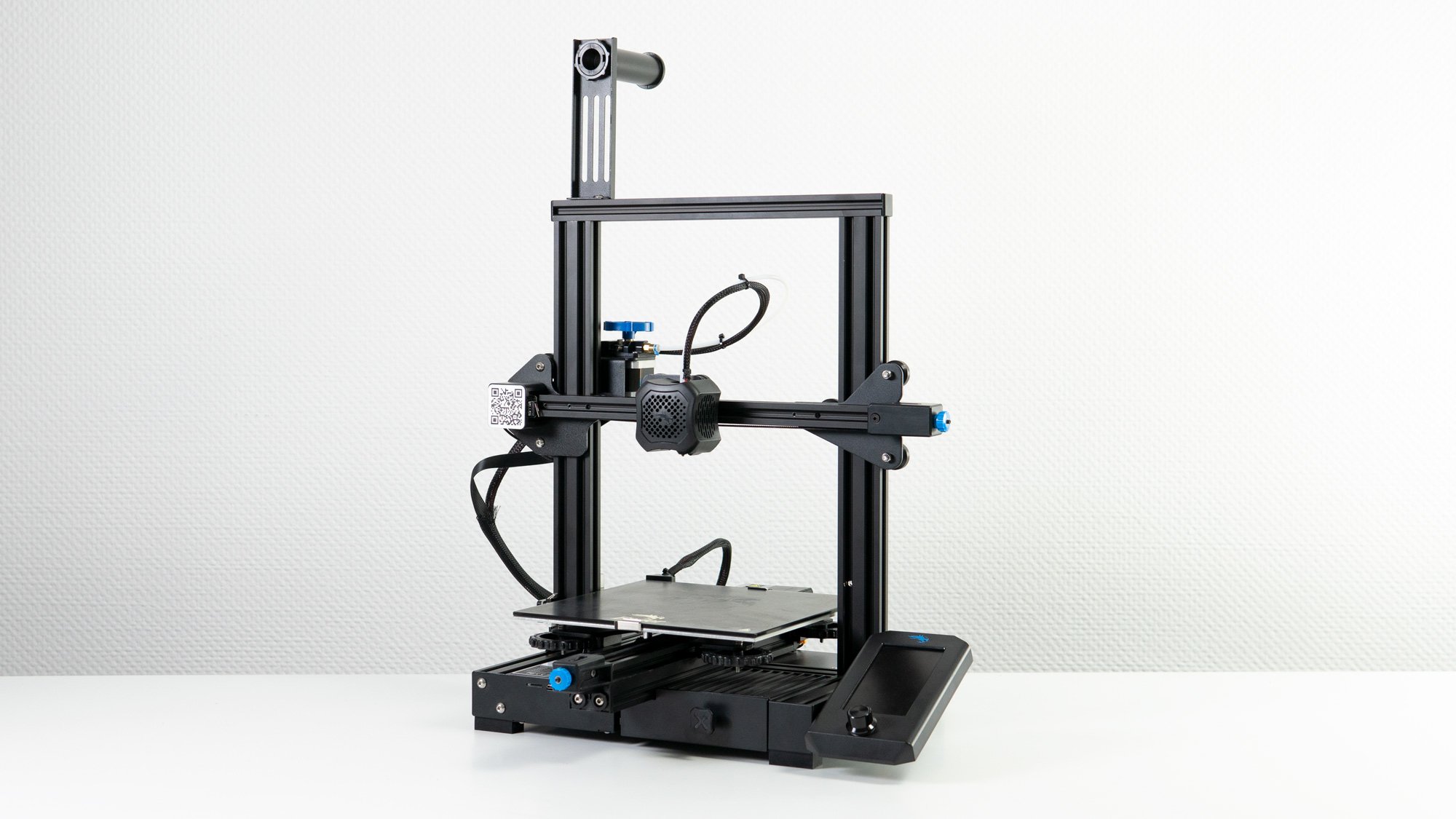 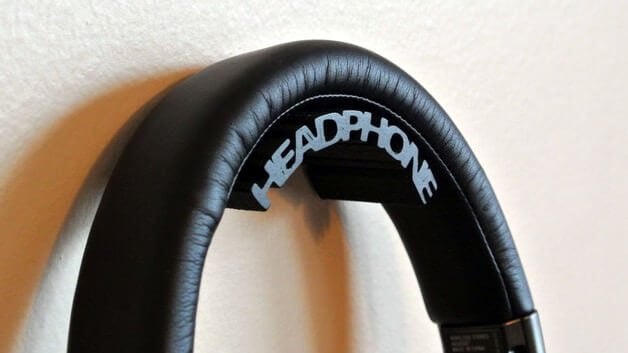 You sure don’t want to throw your expensive headphones on a shelf when you're finished with them. Maker Tosh has a great solution. 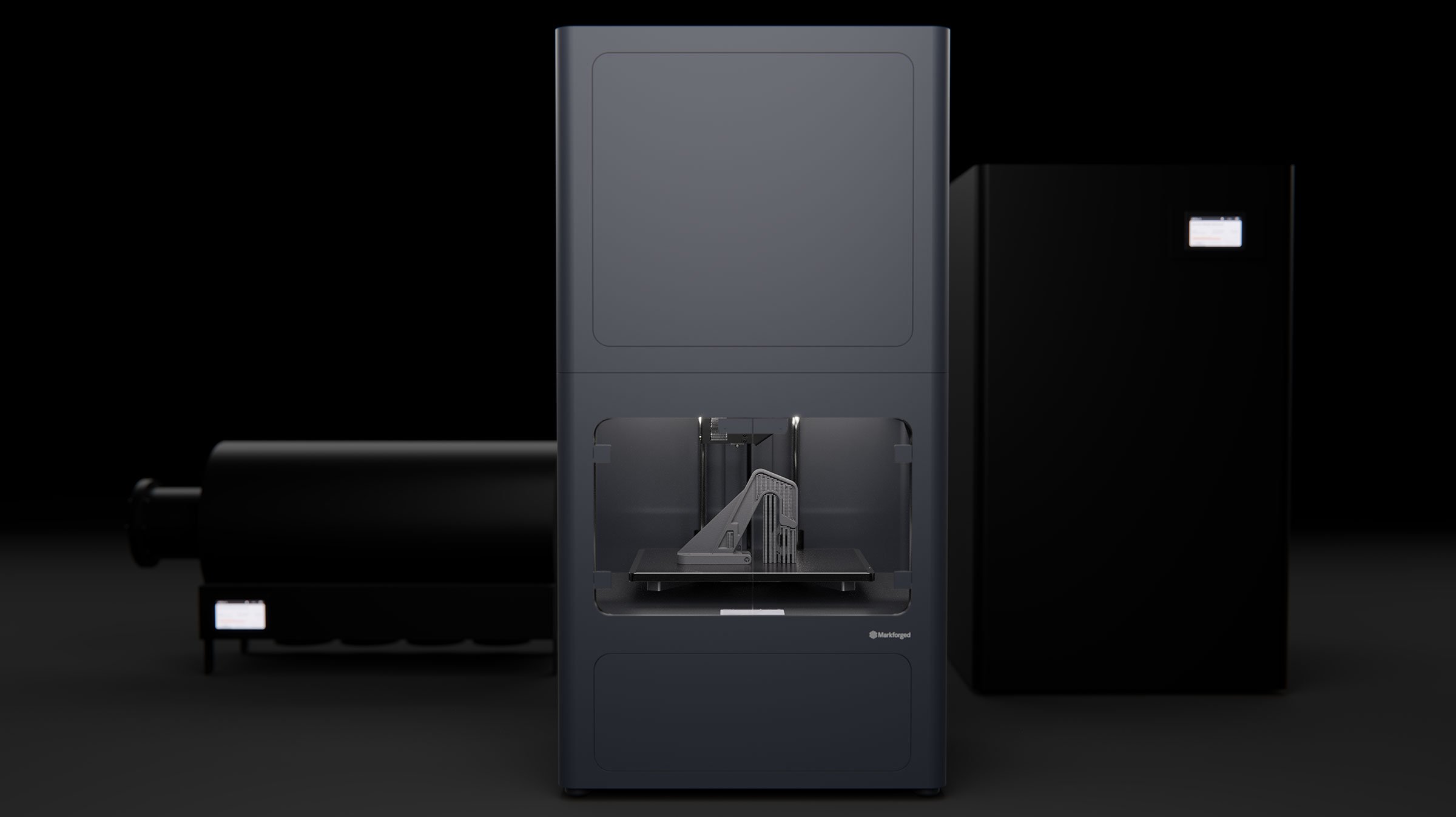 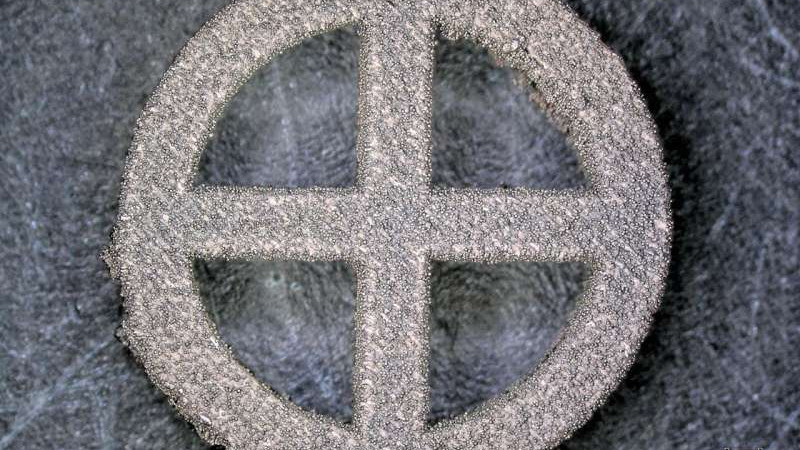 Researchers from RMIT University have developed a groundbreaking technique for 3D printed titanium implants, coating them with synthetic diamonds to improve biocompatibility with the human body. 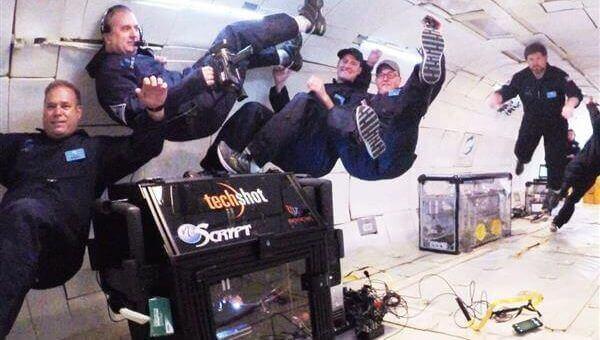 NASA contractor Techshot tests 3D printing in zero gravity. What did they print? Oh, just a heart structure. What's next? A beating heart. 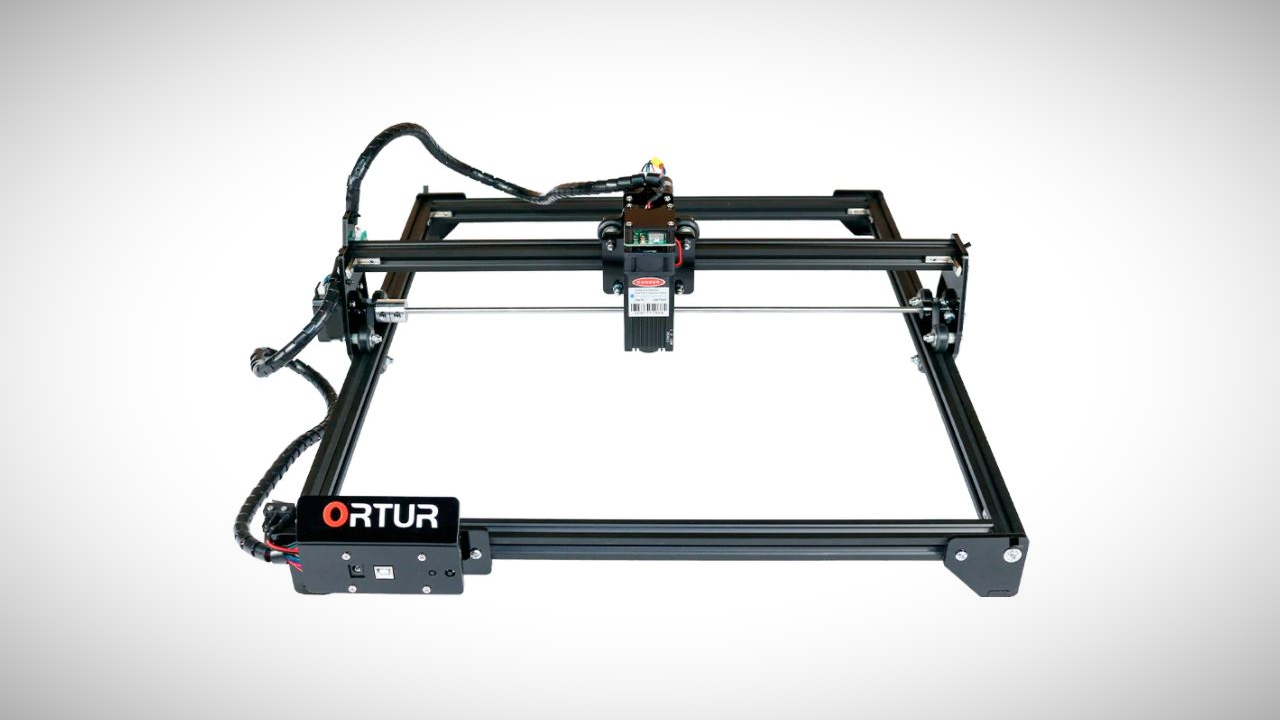 Ortur’s Laser Master 2 is a simple and affordable laser engraver and cutter that won’t blow a large hole in your bank balance. Or the planet. 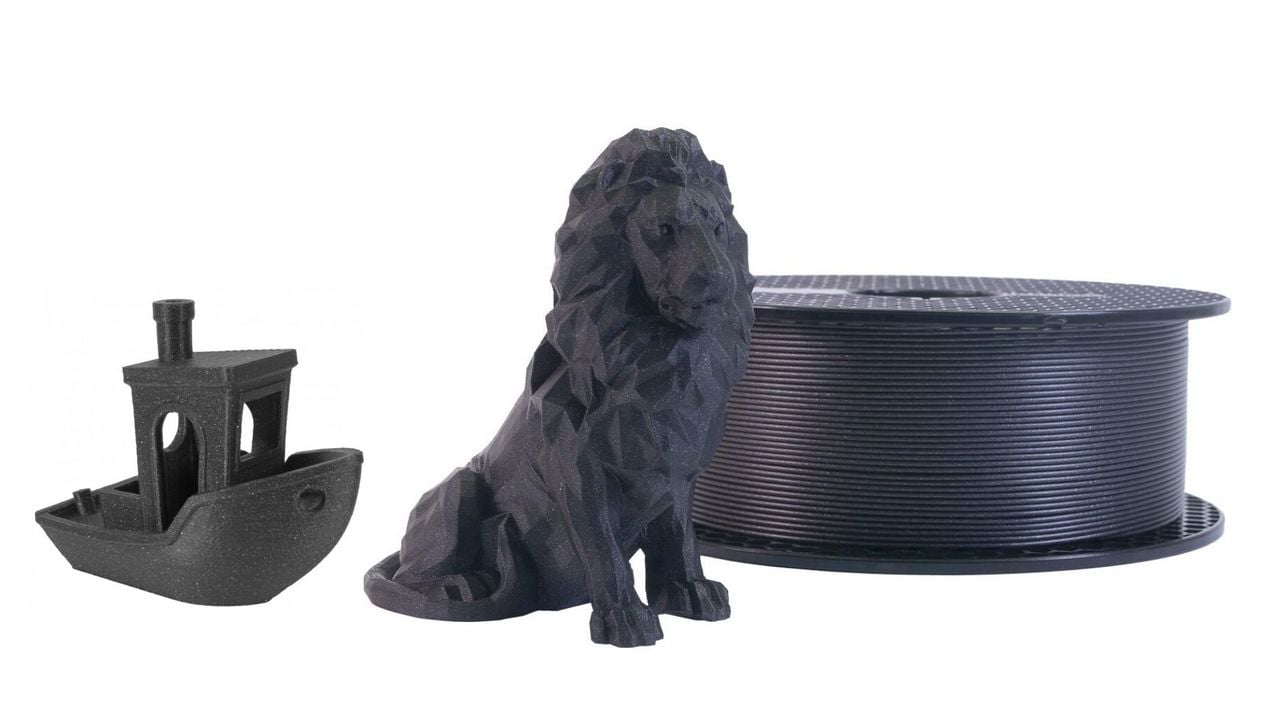 Prusament Filament: All You Need to Know | All3DP

Prusa's at it again, this time disrupting the 3D printing industry with Prusament filament. Keep reading to find out all you need to know!