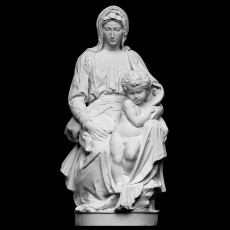 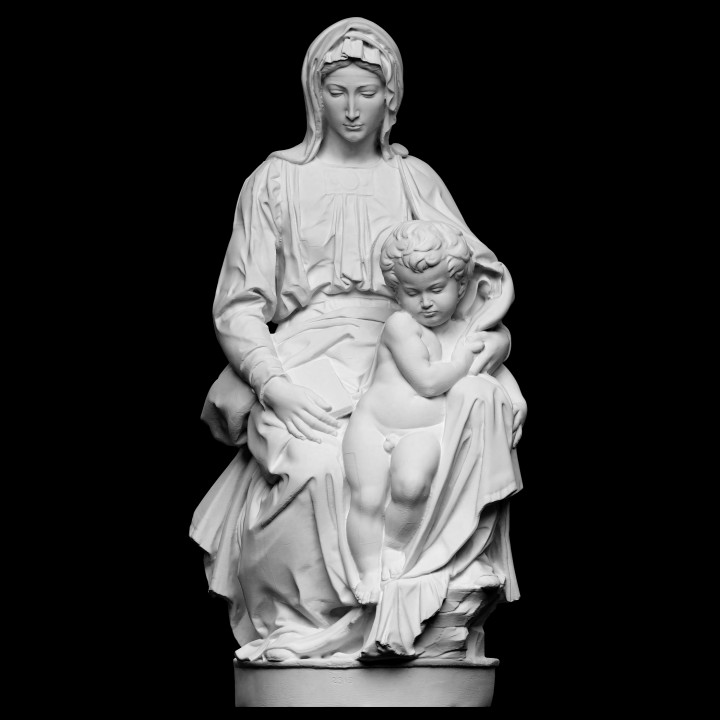 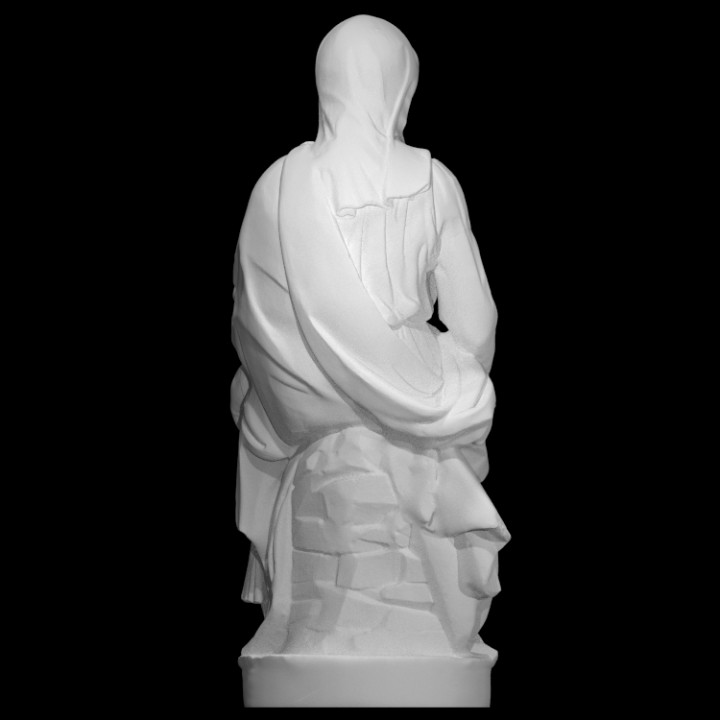 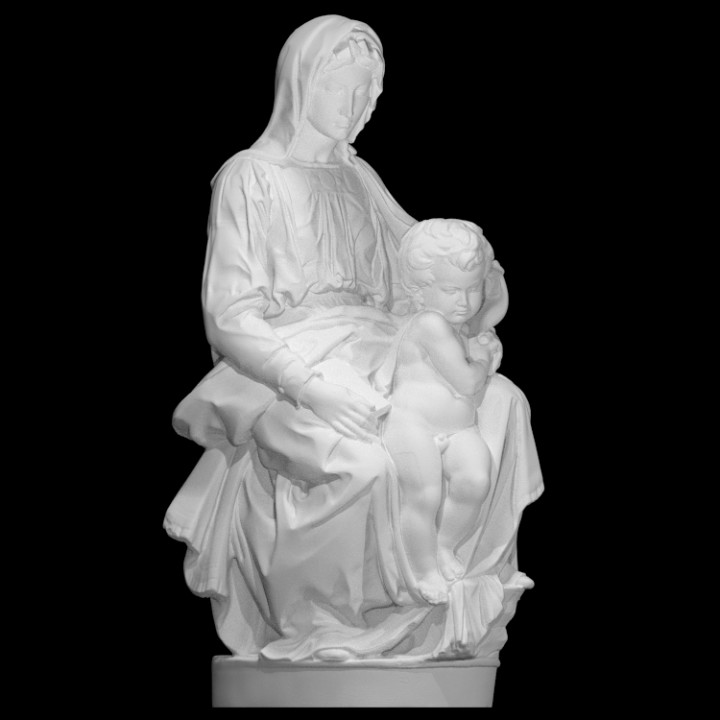 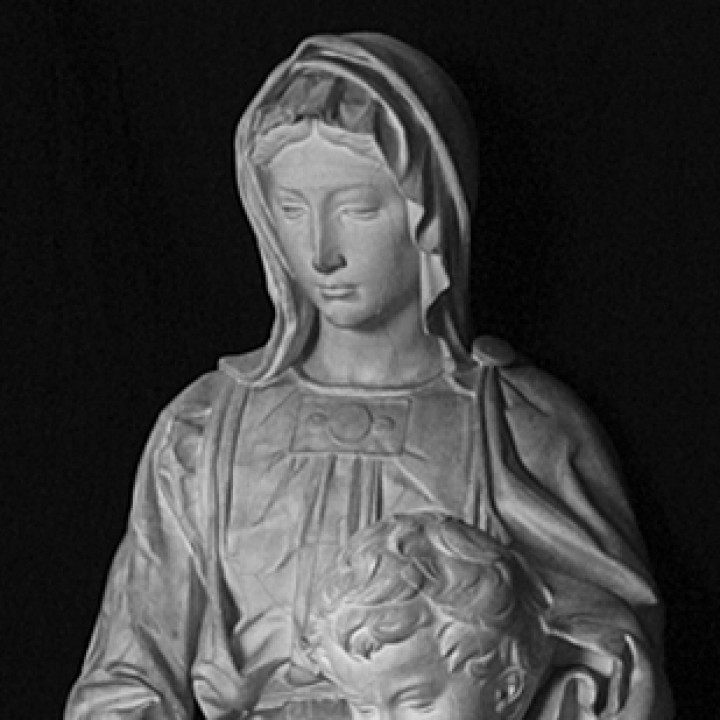 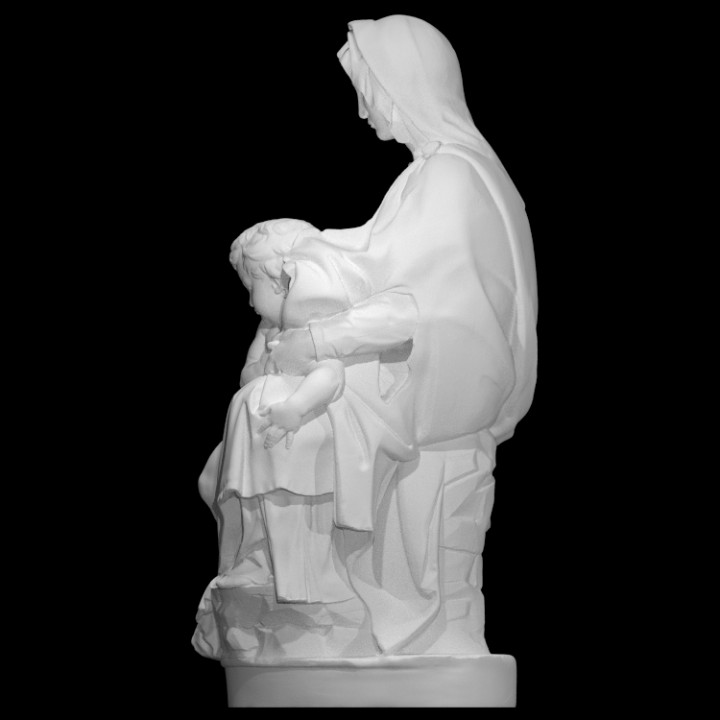 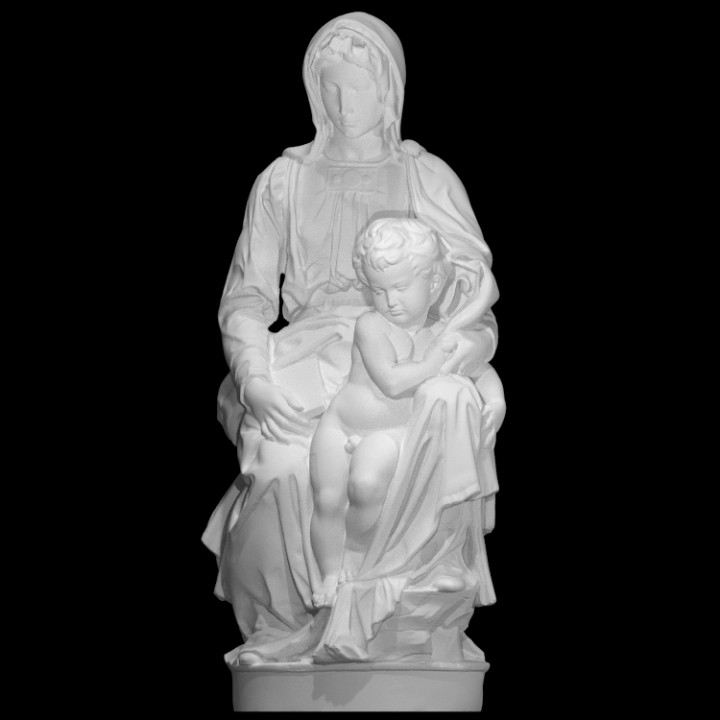 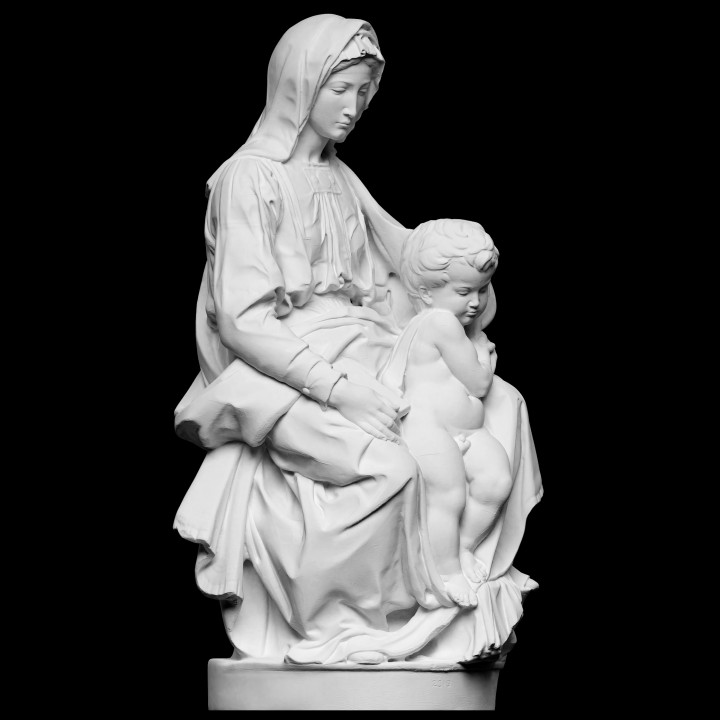 The Madonna of Bruges is a marble sculpture by Michelangelo of Mary with the Child Jesus.

Michelangelo's depiction of the Madonna and Child differs significantly from earlier representations of the same subject, which tended to feature a pious Virgin smiling down on an infant held in her arms. Instead, Jesus stands upright, almost unsupported, only loosely restrained by Mary's left hand, and appears to be about to step away from his mother. Meanwhile, Mary does not cling to her son or even look at him, but gazes down and away. It is believed the work was originally intended for an altar piece. If this is so, then it would have been displayed facing slightly to the right and looking down. The early 16th Century sculpture also displays the High Renaissance Pyramid style frequently seen in the works of Leonardo da Vinci during the late 1400s.

Madonna and Child shares certain similarities with Michelangelo's Pietà, which was completed shortly before--mainly, the chiaroscuro effect and movement of the drapery. The long, oval face of Mary is also reminiscent of the Pietà.

The work is also notable in that it was the only sculpture by Michelangelo to leave Italy during his lifetime. It was bought by Giovanni and Alessandro Moscheroni (Mouscron), from a family of wealthy cloth merchants in Bruges, then one of the leading commercial cities in Europe. The sculpture was sold for 4,000 florin.

The sculpture was removed twice from Belgium after its initial arrival. The first was in 1794, after French Revolutionaries had conquered the Austrian Netherlands during the French Revolutionary Wars; the citizens of Bruges were ordered to ship it and several other valuable works of art to Paris. It was returned after Napoleon's final defeat at Waterloo in 1815. The second removal was in 1944, during World War II, with the retreat of German soldiers, who smuggled the sculpture to Germany enveloped in mattresses in a Red Cross truck. It was discovered a year later in Altaussee/Austria within a salt mine and again returned. It now sits in the Church of Our Lady in Bruges, Belgium. This is part of the fact-based movie The Monuments Men.

After the attack on Michelangelo's Pietà in 1972, the sculpture was placed behind bulletproof glass, and the public can only view it from 15 feet away.

If you produce new work with the model and want to share it with us, drop us a line at [email protected] or [email protected] This scan was produced in collaboration between The Statens Museum for Kunst and Scan the World for the SMK-Open project. Every model produced from this initiative is available under an open source license. 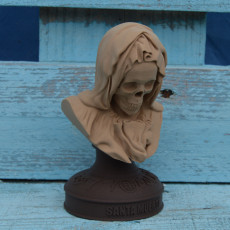 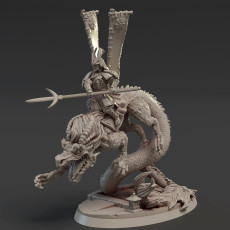 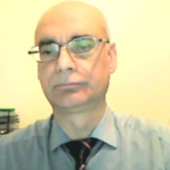 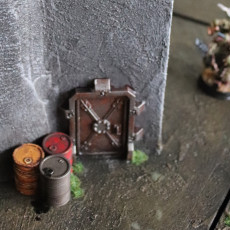 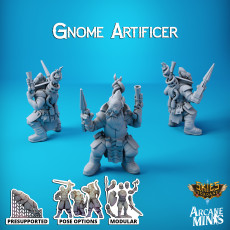 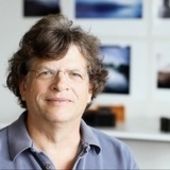 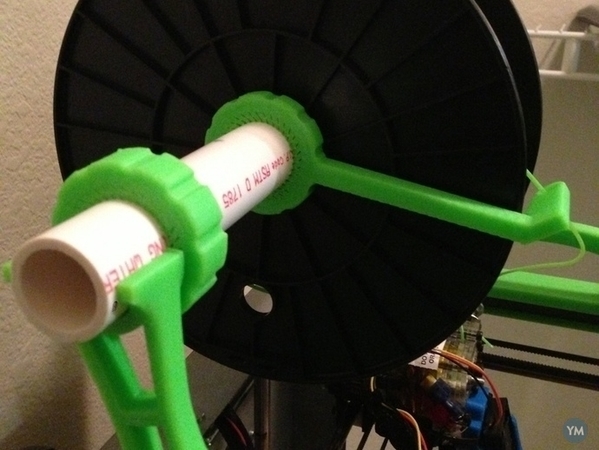 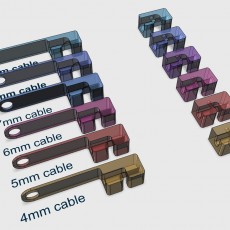 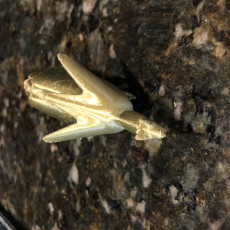 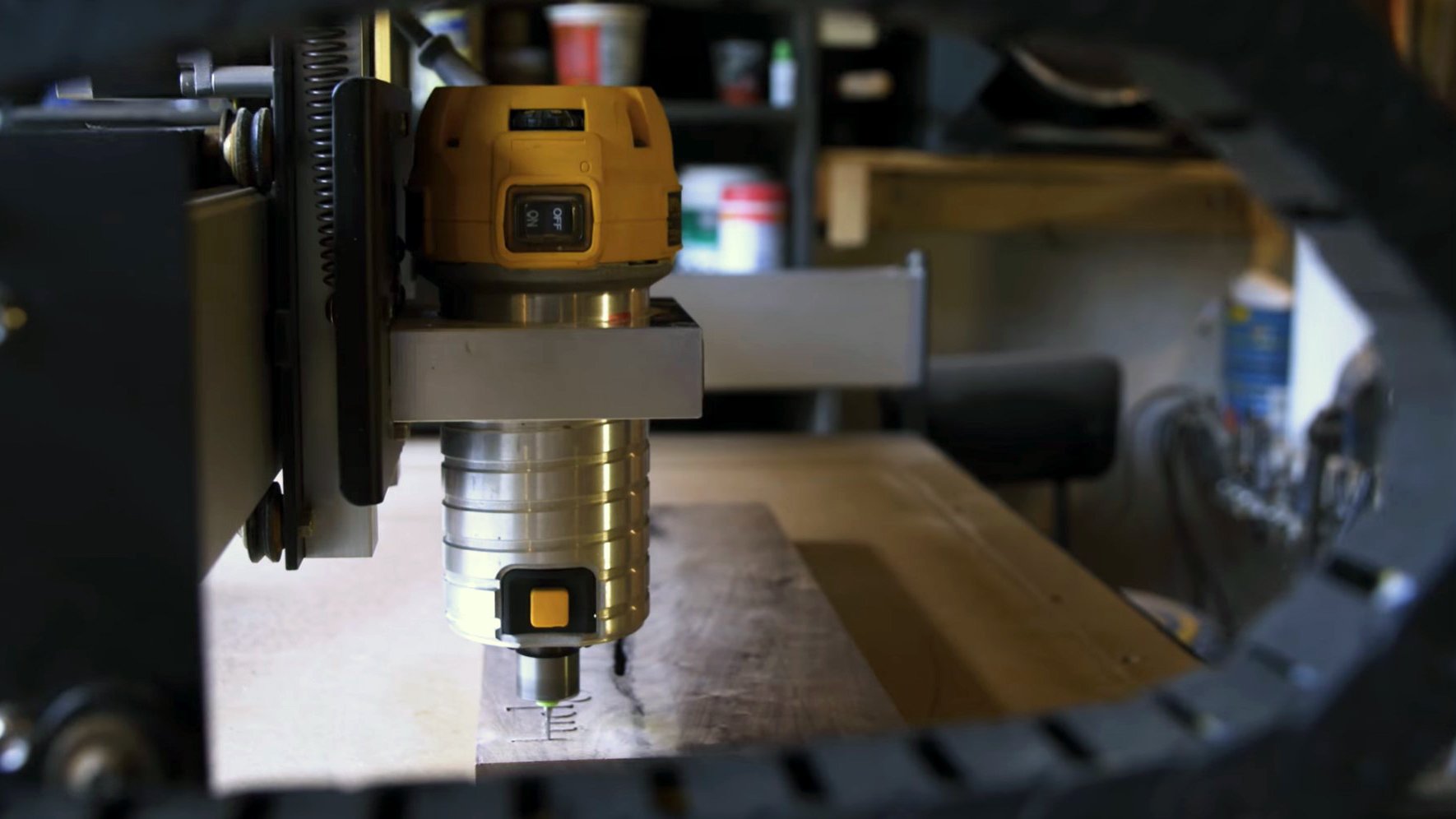 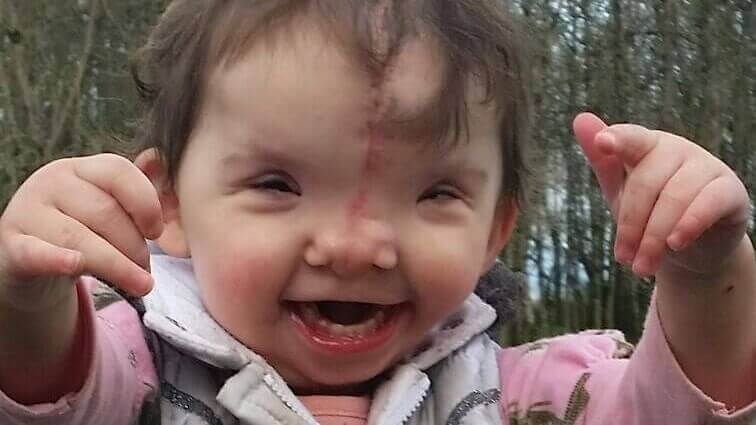 Two-year-old toddler Violet was born with a rare deformity. Her plastic surgeon used 3D printing to help her. 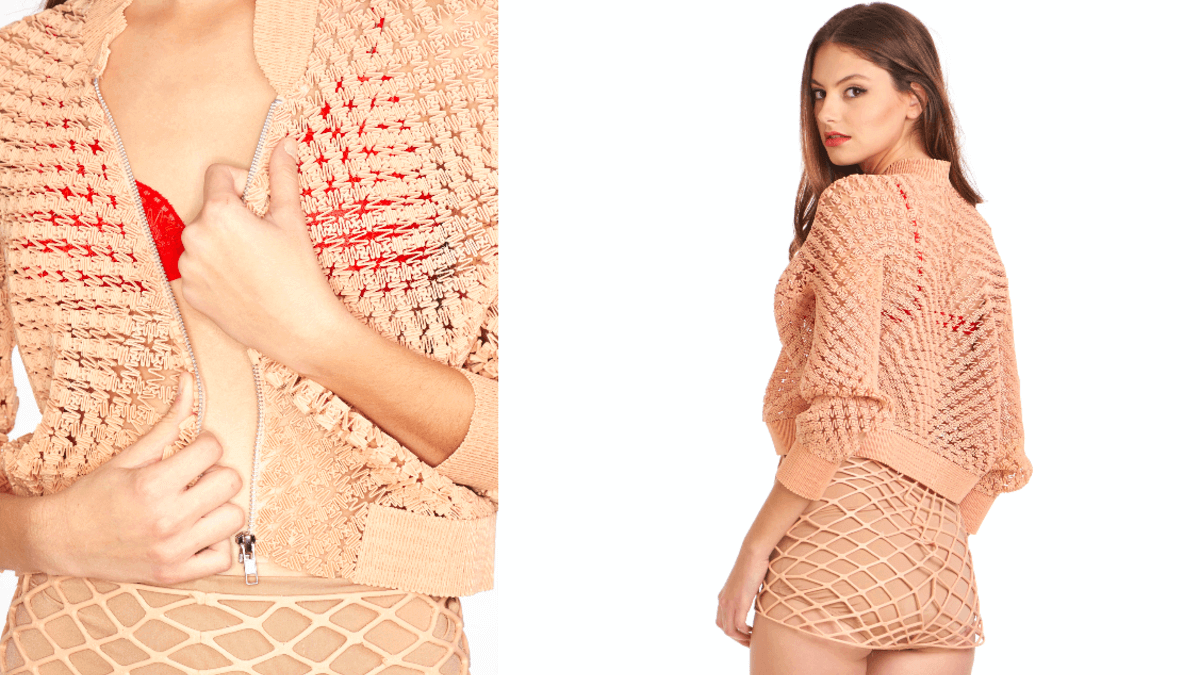 Danit Peleg is back with a second collection of 3D printed clothing; the centrepiece is a limited edition jacket, an absolute snip at $1,500. 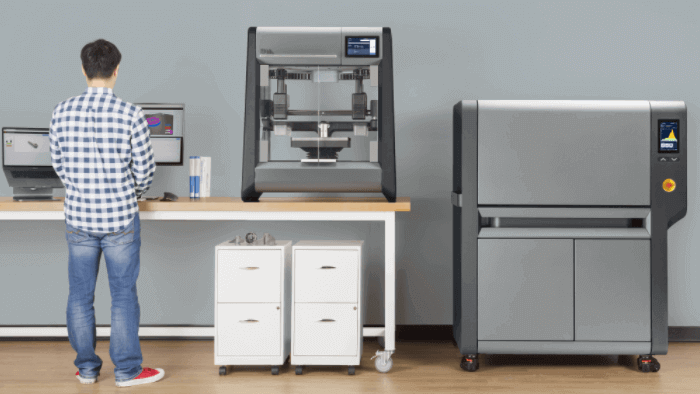 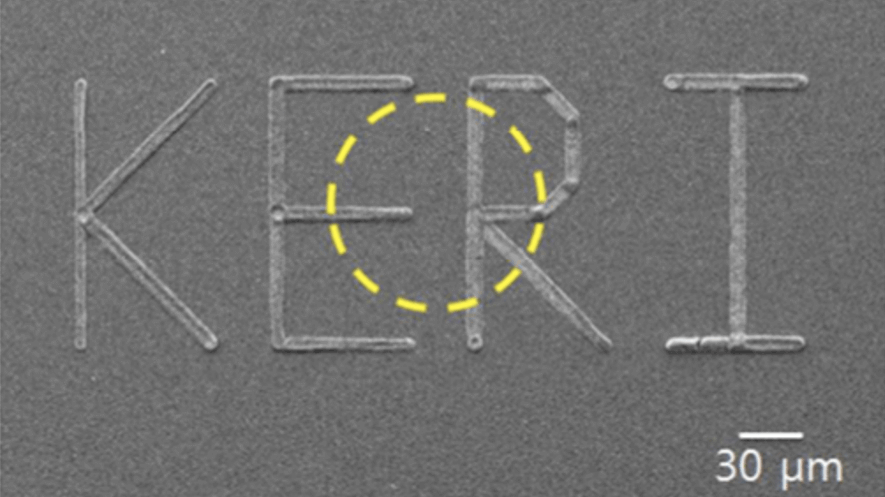 Korean scientists, from KERI, developed a 3D printing method which can print nano, electronic tubes which could enhance wearable technology. 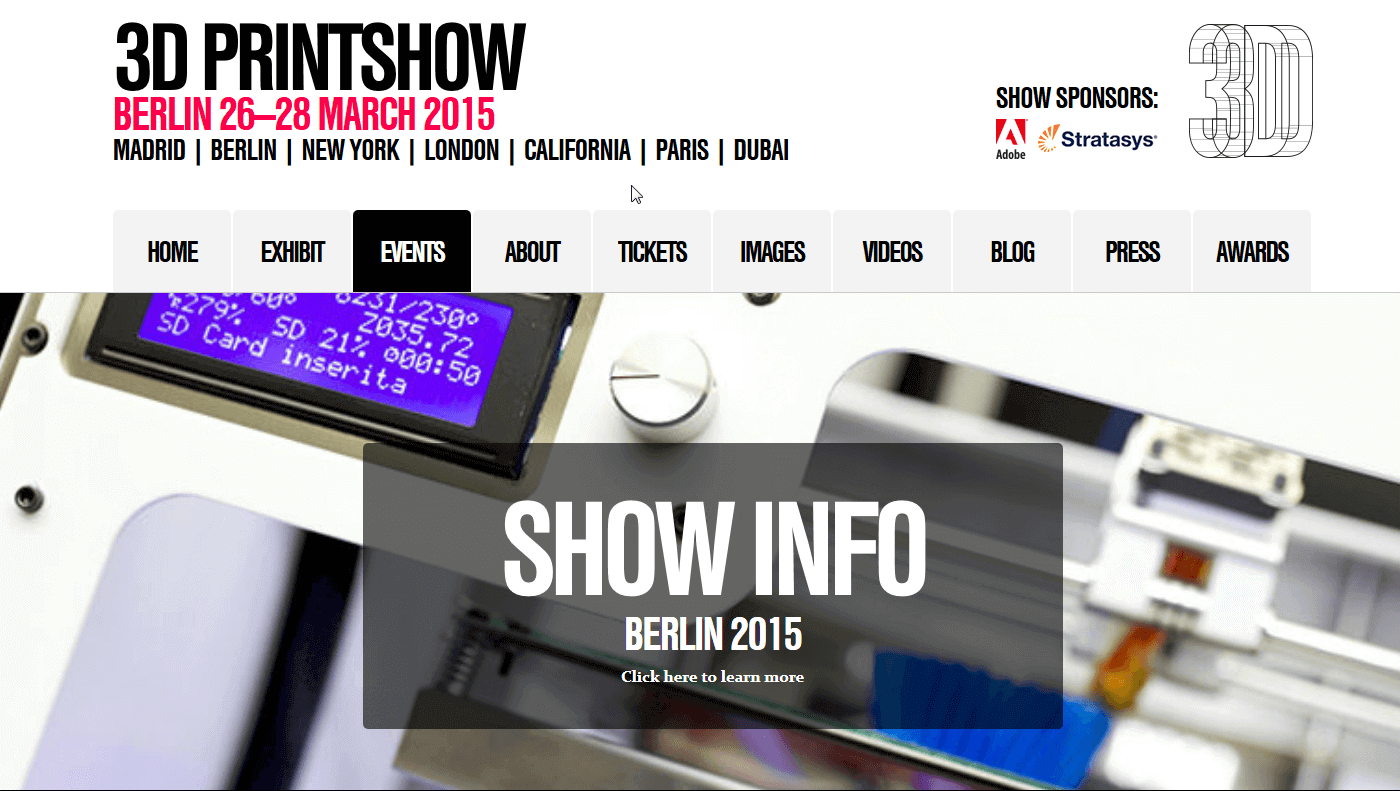 All3DP.com talked to Ilja Laurs, Nextury Ventures, about his perspective on the 3D design/printing industry - in particular, his view regarding investing. 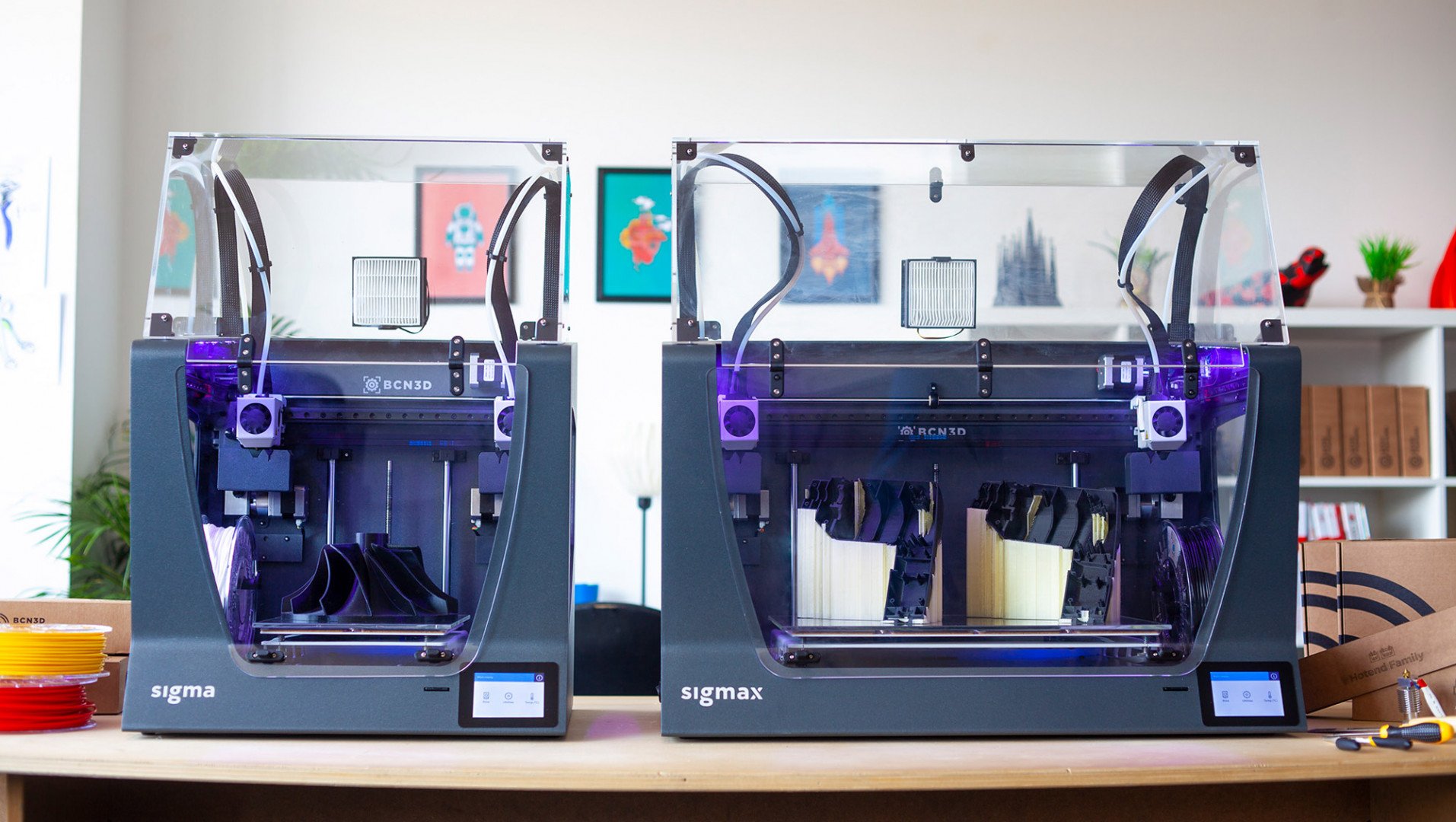 Open Source 3D printer manufacturer BCN3D has just lifted the lid on the Sigma R19 and Sigmax R19 3D printers. New features include custom hotends by E3D, Bondtech extruders, filament runout detection and other across the board improvements.

As a high-end slicer, Simplify3D is rife with complexity. Check out this Simplify3D troubleshooting guide to overcome the most common issues! 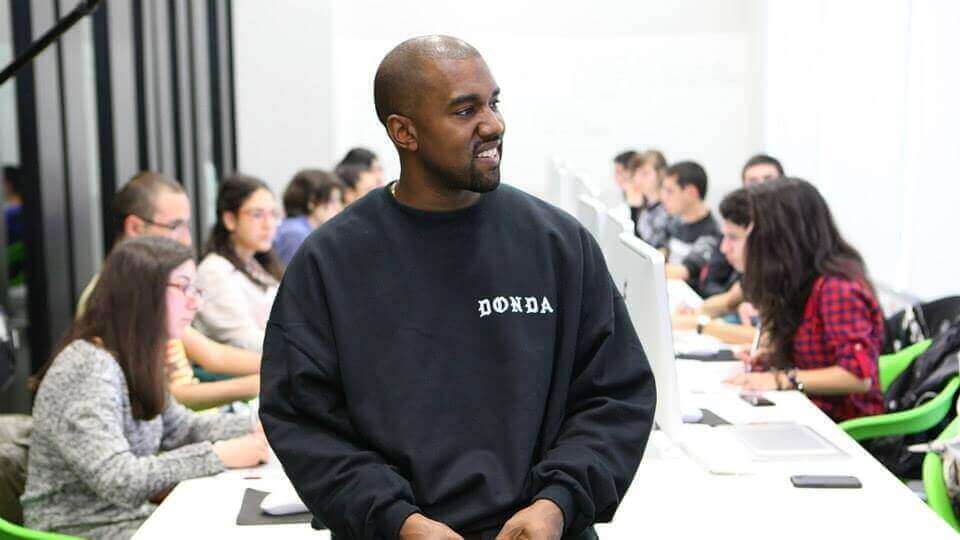 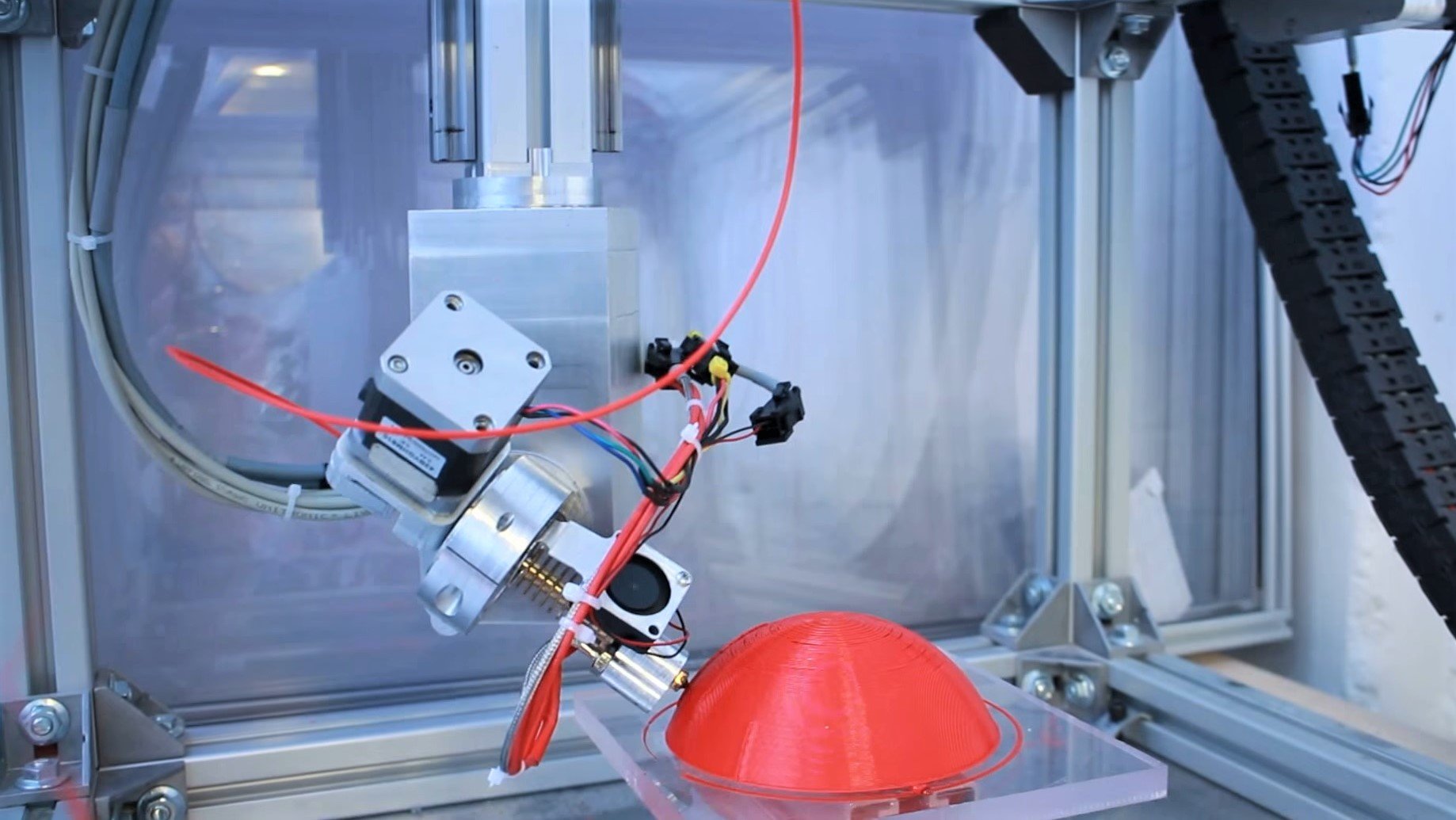 3-axis 3D printing is great, but imagine what could you do with a 5-axis 3D printer! Join us as we explore the possibilities! 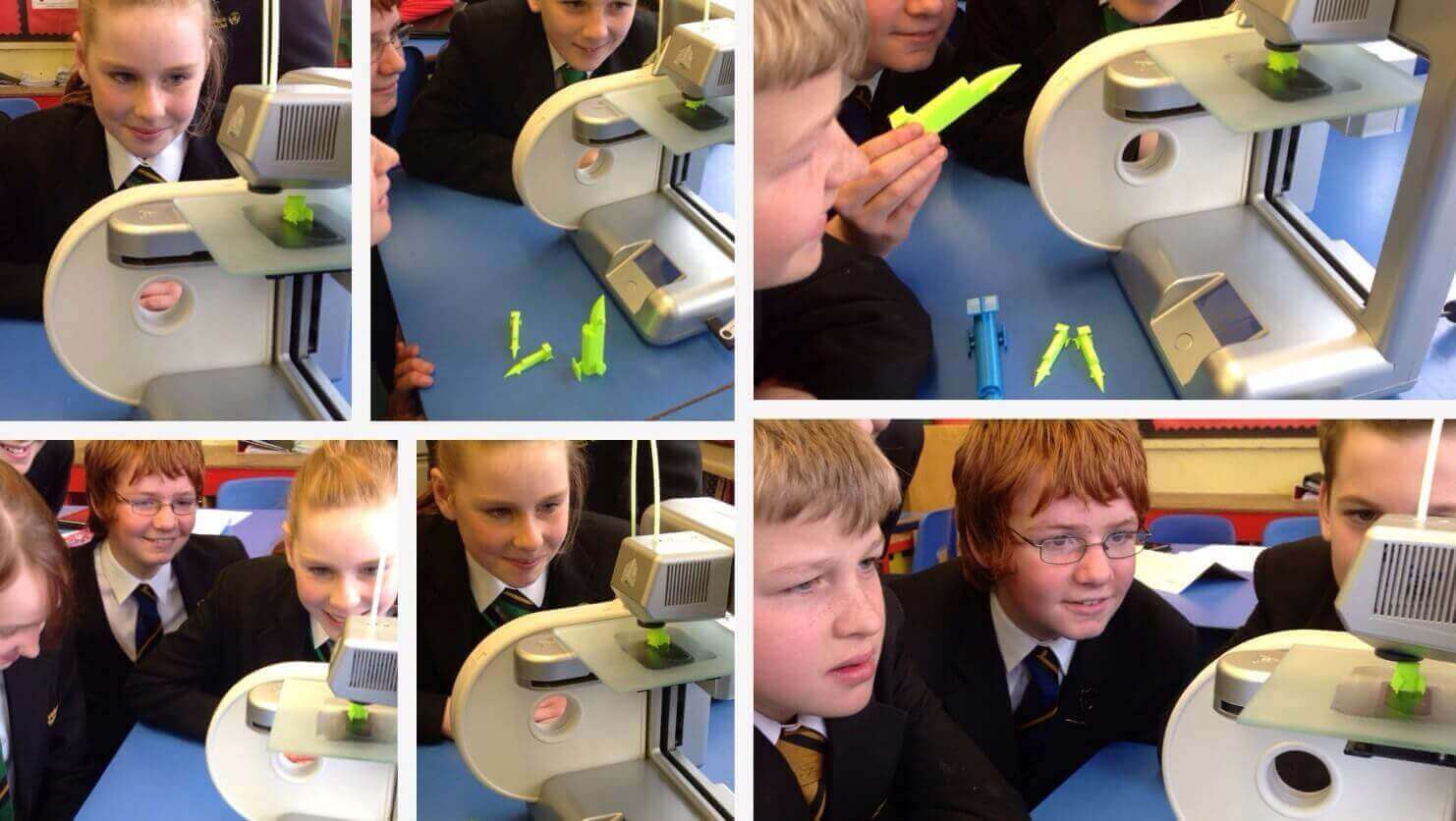 Taking it to School: Learning with 3D Printing | All3DP

3D Printing can bring exciting changes to schools across the curriculum, but only if it stays open, accessible, and focused.